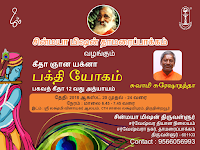 Day 1 summary
Before entering into the text, the following aspects of bhakti was explained.
5 questions
What is bhakti?
We all have love. When this love is expressed towards family it is called paasam (பாசம் or attachment). The more we share, the more we get. (just like knowledge). When expressed towards friends, it becomes friendship.
When love expressed towards the Lord, it is called bhakti. Love towards the Lord is expressed as service to all creatures.
In the case of attachment, there is selfishness involved. In friendship also, there is selfishness involved – usually sustains on the foundation of give and take policy. In bhakti – there is only giving and no expectations.
Attachment is compared to seeds in a box. They don’t sprout and grow and benefit others. Friendship is like a small plant which will give only as long as we nourish it. But bhakti is like a fully blossomed flowering plant which gives fragrance to all without any expectation and partiality. That’s why we worship the Lord with flowers.
The 3 stages of life are compared to the various aspects of love. i.e childhood is total selfish phase wherein focus is more on getting. Then in the youth, love as friendship is evident – here both giving and taking takes place. Finally, in the old age, there is only giving without any expectations.
Bhakti according to great sages
Types of bhakti
At a broader level, bhakti is divided into 2 categories
1)      Kamya bhakti is praying for needs, wishes
2)      Nishkamya bhakti is thanking the Lord for all that we have received
3)      Ishta devata bhakti is having a personal relationship with our ishta devata
4)      Vishvaroopa bhakti is seeing the universe as Lord. Lord has not created world, but he has become the world.
5)      Nirguna bhakti is to worship the Lord without any name and form
Measure of bhakti
Measure of sacrifice determines the measure of bhakti. Eg. Kannappa naayanaar gave his eyes, pusalaar naayanaar gave his heart for the Lord to stay. How much we are ready to sacrifice for the sake of Lord reveals our bhakti. Are we ready to give up a TV serial? 😊
How to develop bhakti
Through knowledge of the Lord, love for God grows eg as we came to know of Abdul kalam ji, love grows. Knowledge of a thing or a person alone creates love and respect in our hearts.
Result of bhakti
Bhakti increases atmabalam, buddhi balam, Mano balam, deha balam. Eg Hanuman ji
How? Because sleep alone makes a person fresh and free of diseases, not mere medicines. That’s why even doctors recommend good sleep after taking medicines. In sleep, we merge with the Lord. From that Lord alone we derive strength to all the layers of our personality. Permanent happiness can be given by the permanent Lord alone and not possible from impermanent things and beings.
Thus, the result of bhakti is happiness and strength.
resources