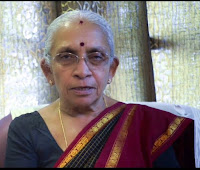 In the initial days, Chyks from Chennai including Swami Mitrananda ji and others started coming to Thamaraipakkam in bikes on Sundays with medicine samples they collect from doctors and distributed it to people who needed it. It was like a small camp under a tree and then slowly slowly doctors started accompanying them and I used to come whenever I could. Then medical camps were started in the villages and the temple and ashram construction also started. Then ACMC’s building was also under construction and the day before the temple’s consecration, ACMC was inaugurated by Pujya Gurudev Swami Chinmayananda.

Around the year 1991-92, ACMC became very popular as there were no hospital facilities for a 30-40 kilometer radius and that was when Dr.Mridula Menon came here and started her service. She was so sincere and served here full time for almost 9 years. Then later I stopped consulting and just involved in organizing the doctors. First when the ashram was under construction, we did not have a place to eat. The doctors used to work from morning till late afternoon and go back home for lunch. Only after the ashram was constructed we had a place to eat. But whatever it is, we used to love working there. I even used to consult at home. But there was so much difference in working here.
Gurudev also had told us to instill faith in the hearts of the patients and the patients were told to go to the temple, pray and then come for treatment.

Being associated with Chinmaya Mission Thamaraipakkam and ACMC had been a beautiful part of my life and I am always thankful to Sarveshwara Bhagawan and Gurudev for this.
testimonial