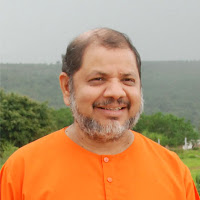 After the Mahasamadhi of Pujya Gurudev Swami Chinmayananda, Pujya Guruji Swami Tejomayananda assumed the post of the spiritual head of the global mission and worked tirelessly for 23 years in fulfilling the vision that Pujya Gurudev started. As he says, I am not in Swamiji’s shoes, I am at his feet. Pujya Guruji has served as Acharya of the Sandeepany Institutes of Vedanta both in India and California, USA..


He has written commentaries on scriptural texts, translated Pujya Gurudev’s commentaries into Hindi, and authored a number of books. A key contribution is “Hindu Culture: An Introduction”, a text acclaimed for its clear description of the basics of Hinduism and adopted as a text in some American high schools.

Pujya Guruji excels in expounding a wide spectrum of Hindu scriptures, from Ramayana to the Bhagavad Gita to the Upanishads. He conducts jnana yajnas on Vedanta as he moves around the world. His easy manner and devotional rendering of Vedanta texts has drawn many newcomers into the spiritual fold.
gurus Sw Tejomayananda